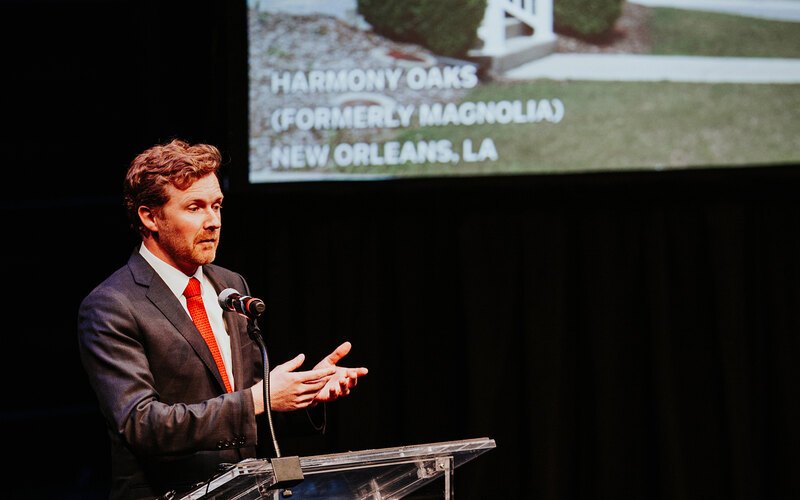 Members of the 2018-2019 cohort of the LAF Fellowship for Innovation and Leadership spent twelve months exploring their big ideas and advancing their proposed projects. On June 13, the Fellows presented the culmination of their work at LAF’s Innovation + Leadership Symposium in Washington, DC. To give greater insight into the Fellowship, LAF is profiling each fellow to share more about their how their projects progressed and the personal journeys they embarked upon. Read on to learn about Karl Krause’s inquiry into the landscapes of public housing and their contributions to feelings of community.

Across the United States, public housing is being redeveloped into mixed-income developments that replace traditional public housing with a new community of neighbors from diverse social and economic backgrounds. Karl’s work asks how the lives of public housing residents are being impacted by the sometimes years-long rebuilding of their homes and neighborhood, and how design can help rebuild community among new neighbors. Throughout the year, Karl traveled to mixed-income redevelopments across the country to interview Housing Authority administrators, developers, designers, and residents and discuss the issues faced in these communities and the complexities that go into the rebuilding process. By visiting redevelopments that were built at different times – some completed as early as 2004 – Karl’s inquiry highlights the successes and opportunities for improvement that developments in the planning and construction phases can learn from. Karl is gathering his research and interviews in his soon-to-be-released documentary Between Neighbors, which will share stories of community and the ways in which development and design decisions affect the lives of those he spoke with.

Core to Karl’s thesis is the belief that the communities of traditional public housing have exceptionally strong bonds between neighbors. These communities are fundamentally altered by redevelopment, and challenged by the introduction of new, unfamiliar neighbors. The landscape of mixed-income housing is especially important in building cohesive neighborhoods across economic differences. When people spend time outside in the landscape, they are more likely to meet one another and build relationships, thus building community. From his research, Karl has come to understand community in public housing has an irreplaceable value, offering support when institutional resources are unavailable; developers must work hard not to erase these important relationships as they rebuild public housing into mixed-income neighborhoods.

As his project evolved during the Fellowship year, the program’s Lead Facilitators Lucinda Sanders and Laura Solano helped Karl to find his place in the conversation about public housing. The leadership component of the Fellowship clarified the levers of change available to landscape architects and how best to use them. Building on this foundation, Karl looks forward to continuing to find ways to act on his knowledge and values through practice and advocacy.

You can watch Karl's presentation from the 2019 LAF Innovation + Leadership Symposium here.