Ups and Downs of Post-Graduation Life 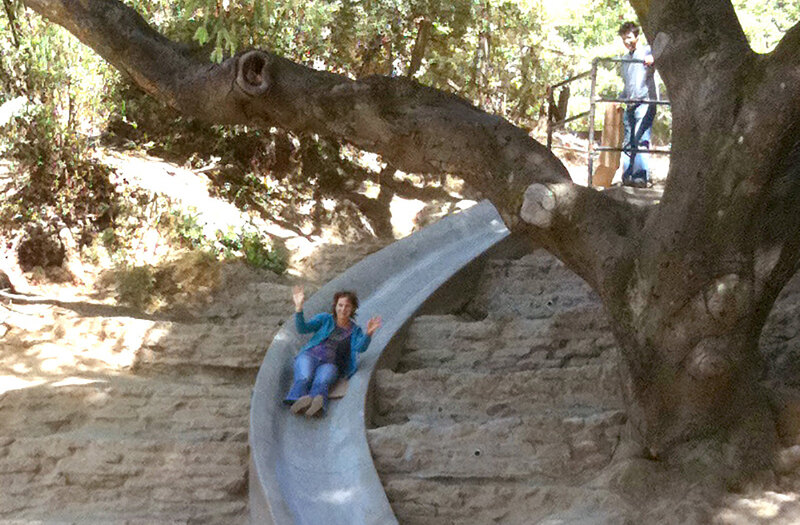 In 2008 Andrea Gaffney, then a Masters student at the University of California Berkeley, became LAF’s first National Olmsted Scholar. We touched base with this rising leader to learn about her post-graduation experiences and the role the Olmsted Scholars Program played.

Tell us about what you’ve been doing since graduating.

The day after graduating from the Master's programs in Landscape Architecture and City & Regional Planning at UC Berkeley in May 2009, I got on a plane to Portugal where I spent two weeks working on a multi-disciplinary watershed workshop in the urban periphery of Lisbon. By the beginning of July, I was back in Berkeley working as a contract researcher for the newly formed Center for Resource Efficient Communities. For five months, I helped develop CREC’s White Paper as well as research methods for measuring and evaluating thermal comfort in the public realm. In December, I went to Copenhagen for two weeks for which I used a portion of the Olmsted Scholar award money to partially fund my trip. My visit coincided with the COP15, so it was great to see all of the public outreach on climate change issues. I went to Copenhagen in search of answers, to see if I could live there, work there, and teach there… I borrowed a bike and off I went! I saw some fantastic public realm designs that inspired my research into new forms of “urban nature.” Unfortunately, just like California and much of the rest of the world at the time, there was not enough work to warrant hiring new designers, so I returned to California and resumed my job search.

When I graduated, I thought I was going to find a fantastic career-growing design position somewhere in the Bay Area. I had three professional design degrees and a heap of awards to sing my employable praises. So, I applied to positions from April through December hoping to find my dream job. By the end of October, when I had only managed to schedule one interview, I changed my outlook from finding my dream job to simply finding a job. With the end of November approaching and no job prospects in sight, I had a choice to make: Do I delay the job search and use the remaining Olmsted funds to pursue my own research on Urban Oil? Do I expand the region in which I am looking for jobs? Do I put the long-term job search on hold and go back to freelance work? The answer was YES.

In January 2010, I moved to New York City for a contract position at Project for Public Spaces to work on the public realm/urban design of an undisclosed new city in Abu Dhabi, UAE. This was a fascinating exercise: how do you create a sense of place in an instant city? Our answer was to start with the programming and design of the major public open spaces. We’ll see what happens in a few years from now when the city is built…

After seven months at PPS, and sixteen months looking for a position, I accepted a permanent urban design job at Skidmore Owings & Merrill in New York City. I am the only landscape architectural designer on staff in this 200+ person office and it is my mission to incorporate landscape design and ecological systems thinking into the urban design practice. I am currently working on a Clinton Climate Initiative new city design in Ahmedabad, India. These new cities are fascinating, but it would also be great to dig into some work in the US. I am incredibly excited by the prospects for the Seattle Central Waterfront project, which 2009 National Olmsted Scholar David Malda mentioned in his update.

Was being the 2008 National Olmsted Scholar helpful to you during this period of transition?

The common thread throughout all of these experiences has been my focus on the design and perception of the public realm—constructing the phyiscphysicalultural landscapes of a place. I continuously strive to transform and reconsider infrastructure as an integral experience of the public realm, which is an extension of my master’s thesis San Pablo Avenue: Coding an Urban Ecotone. The Olmsted Scholars Program funding significantly contributed to the research for my thesis. The remainder of the funds went towards paying down my student loans and will fund the beginning of the Urban Oil research project in January 2011 with a trip to Maracaibo, Venezuela. For more details on Urban Oil, check my website in 2011.

What advice would you offer current students?

In a time of economic uncertainty, the LAF Olmsted Scholars Program provided me with an incredible sense of security, and afforded me the time to develop my research ideas while looking for a job. My advice for current students is to finish school with a huge list of ideas. If the dream job doesn’t come along, take advantage of contract/freelance work and use your free time to pursue your own ideas and innovate.

Any opinions expressed in this interview belong solely to the author. Their inclusion in this article does not reflect endorsement by LAF.