The Landscape Architecture Foundation is pleased to announce the two winners and six finalists for its 2014 Olmsted Scholars Program, the premier leadership recognition program for landscape architecture students.

Sara Zewde, a master’s student at the Harvard Graduate School of Design, was selected as the 2014 National Olmsted Scholar and recipient of the $25,000 graduate prize. Sara intends to use the award to return to Rio de Janeiro, Brazil and New Orleans, Louisiana to continue working with the communities of Pequena África and Treme in designing their urban landscapes in a culturally and ecologically relevant manner. The award will also enable her to pursue additional projects where communities desire a spatial interpreter of cultural values. Sara expects to receive a Master of Landscape Architecture in May 2015.

Erin Percevault, an undergraduate at Louisiana State University, is the other 2014 National Olmsted Scholar and recipient of the $15,000 undergraduate prize. She plans to use the award to investigate how new nuclear technology and government legislation may create and alter industrial landscapes surrounding the Lemhi Pass, a National Historic Landmark along the wildlife corridor between Yellowstone National Park and the wilderness regions of central Idaho. Erin is pursuing a Bachelor of Landscape Architecture and expects to graduate May in 2015.

Also honored are six National Olmsted Scholar Finalists, who each receive a $1,000 award.

An independent jury of leaders in the landscape architecture profession selected the winners and finalists from a group of 45 graduate and 30 undergraduate students nominated by their faculty for being exceptional student leaders. These top students earned the designation of 2014 LAF Olmsted Scholar and join the growing community of over 300 past and present Olmsted Scholars. See all past winners and finalists here.

In addition to the winner and finalists, the graduate nominees from each university are recognized as 2014 LAF Olmsted Scholars, which denotes distinguished student leadership in landscape architecture. 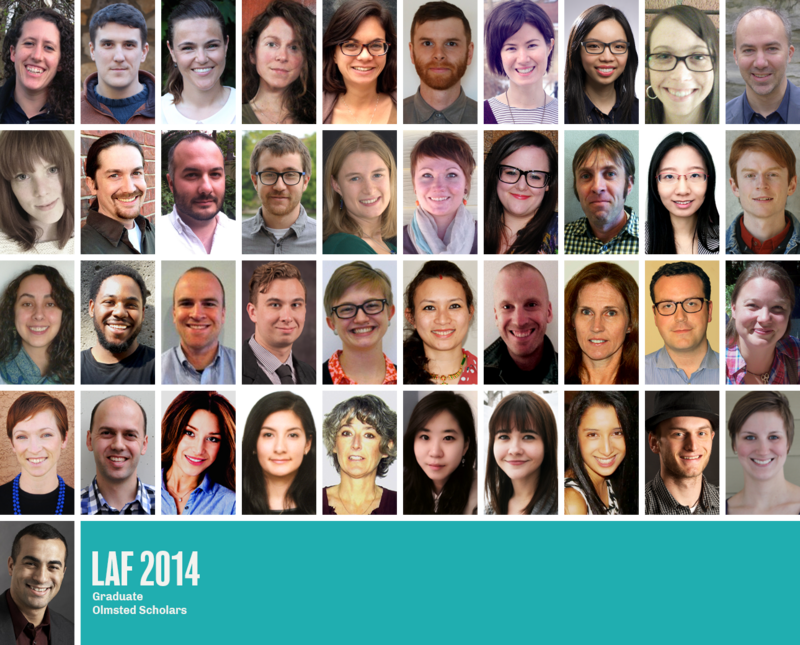 In addition to the winner and finalists, the undergraduate nominees from each university are recognized as 2014 LAF Olmsted Scholars, which denotes distinguished student leadership in landscape architecture.

The jurors for the graduate award were:

The jurors for the undergraduate award were: